We've just released new summer dates for our equine courses in Devon. Whether you are looking to learn more about horse psychology, behaviour, equine problem solving...or if you want to develop your knowledge, confidence and skills, we have the perfect course for you! All our clients are giving "excellent" ratings for the standard of teaching on our courses, as well as for the overall Understanding Horses experience on the day.

We'll be at the p4p Open Day

People4ponies are having their annual open day on bank holiday the 3rd May. They are opening their doors to visitors between 11am-4pm. There will be pony handling demonstrations throughout the day, visitors will get to meet the ponies...and there is a plant sale, tombola, book stall, jams, cakes, and delicious cream teas available all day. It's a wonderful opportunity to support this small charity who are doing such good work. Understanding Horses will have a stand there too to promote the courses we hold at p4p, and Faye will be available to talk with people who are having problems with their horse or pony.

Admission is free and children are very welcome. All the funds raised for people4ponies help them to care for, rehabilitate, train and rehome equines, particularly those who are very traumatised. If anyone would like more information, they can visit http://www.people4ponies.co.uk/ or phone Cilla King on 01884 860252.

We look forward to seeing you there!
Posted by Understanding Horses at 16:53 No comments: 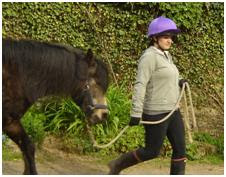 Today I ran an extra date of "Horse handling for the less confident person", which is one of my favourite days to teach. It's really lovely to see people grow in confidence during the day and begin to realise that they can understand horses and ponies and be comfortable and in control around them. It's really important that people can ask lots of questions and they finally get the answers to why horses do certain things. So often people have observed really interesting equine situations and behaviours, but they feel puzzled as to what was actually happening in that situation. It's great to help them have those light bulb moments when things suddenly fall into place.

In the morning we covered some theory about horse behaviour and psychology, and after practicing our skills human-to-human, we headed out into the field to put the knowledge into practice. In fact, getting to interact with and observe the p4p herd is one of the most popular parts of this course!! The ponies are the best teachers of all!!
After lunch, we looked at how to feel at ease around horses when interacting with them in a stable...and finally, I taught safe leading techniques...which we practised with several different ponies. In the photo, Rocky is really concentrating on his handler during leading practice.
Course feedback:"For me, I really enjoyed spending time in the field with the herd and find their behaviour fascinating...Faye is very good at teaching and has great patience with you and she is very easy to get along with. I asked many questions and she was happy to answer them all. Thank you very much for a great day".
Posted by Understanding Horses at 14:28 No comments:

A visit to NEWC

On Thursday I made a special visit to Buckinghamshire to attend the National Equine Welfare Council AGM. It was a brilliant opportunity to support people4ponies, as well as the ponies in the South West region; to highlight the current equine problems; and to voice points of concern to be addressed by the committee. It was a long day...but well worth the trip to be a voice for the ponies, and p4p. It's wonderful that their work is being recognised at this level!
Posted by Understanding Horses at 14:43 No comments:

I've just released the first date for our new course "A guide to horse and pony management". It will be running on 15th May and it's a chance for people to spend a day learning about stable and field set-up and management; feeding; worming; hoof and health care - including how to recognise and avoid common health problems. We already have good interest in this course - it's an essential guide for anyone looking to take on or look after a horse or pony.

A guide to choosing your perfect horse or pony 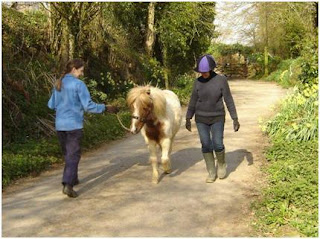 This afternoon, the weather was just perfect for our half day course "A guide to choosing your perfect horse or pony"! We covered everything from producing a bespoke equine "shopping list", to the all important guide and checklist for assessing an equine (for behaviour, skills and health)during a viewing. We ventured out into the sunshine to put the newly found participant knowledge into practice by doing an assessment of a pony.

Here in the photo, we are looking at an effective technique used to check for minor lameness - it can be quite tricky to match the strides of these ponies with little legs - there's not much time between one leg coming up and the next one coming down!...It's not compulsory to lead whilst walking backwards for this technique, it's just useful for teaching it!!
.
Course feedback: "The quality of the teaching was excellent...The practical, pragmatic, hands-on approach is exactly what I need. I like Faye's calm yet self assured style, which creates a safe environment while stretching me a little so I learn more. The ponies are brilliant!"

Posted by Understanding Horses at 14:44 No comments:

On Tuesday, I went to help the owner of a 16.1hh hunting horse called Benson. He's a lovely, well mannered horse in all respects...except for when he's being groomed, being tacked up or having his rug put on or taken off. In these situations, his relatively new owner was finding his reactions very aggressive - he was swinging around with his head and kicking out. Very sensibly, his owner had him checked over by a chiropractor to make sure his responses are not due to any pain or discomfort - and he received the all clear.

On meeting Benson, it was possible to look at understanding and improving his reaction to these 3 situations. We were able to make good progress using the advance and retreat method, which allows us to create a positive association with each activity. Benson has white hairs on either side of his saddle area, and it seems quite clear that at some point in his life he has suffered from saddle damage - which is probably when his negative association with the tacking up process first began. Benson's owner picked up the advance and retreat method very quickly, and for the first time ever, she was able to put a saddle blanket on him with no aggressive reaction at all - he stood calmly and quietly as it was put on, adjusted and taken off.

Benson hates being touched on his chest area and we were able to get him more used to this so that he doesn't react in a negative way. We also started to work on his dislike (or hatred!) of rugging. I could throw my waterproof jacket over Benson, move it around and put the sleeves around his neck and he had no problem with this at all...but when he sees a rug, it's enough for him to start scowling - so that's where we started. Benson has been reacting in these ways for quite a while so his owner will need to be consistent with the advance and retreat technique - there is a lot of history to undo but they have already made some great progress in a short time. Benson is a very sensitive, communicative horse and a real sweetie!


The latest update from the owner, is that she is definitely continuing with the advance and retreat method - after coming back from riding out after our session, her husband commented on how Benson was the calmest they had seen ever him, which is great.
Posted by Understanding Horses at 14:38 No comments:

Welcome to the new blog! 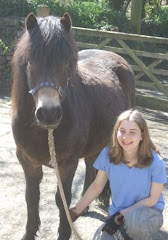